Since 2006, BILD has been helping women's associations in eastern Bosnia harness their collective purchasing power and establish sustainable sources of income.

Working with 6 women's associations representing over 250 families who live along the Drina river in eastern Bosnia, BILD provides start-up funds and helps organize deliveries of baby chicks and chicken food to groups of women who have, with their families, returned to their pre-war homes.

Donated funds help inspire investment by over 200 members of the women's associations each growing season. With over 8 tons of chicken food delivered with each collective purchase, the distributor provides a discount. The combination of donated funds and the discount results in women paying 20% less than the store price. Furthermore, the women invest their time raising the chickens resulting in added value. A fully grown chicken is twice the value of the investment in chicks and chicken food.

Hence, a $10 donation inspires $60 in investment which results in $140 worth of chickens.

Since February of 2006, BILD has delivered over 37,000 baby chickens and 189 metric tons of chicken food to over 250 families through 6 women's associations in eastern Bosnia. With the local investment of time and resources raising the chicks, the total value of the full grown chickens through this project since 2006 is over $570.000.

The project first began in late 2005 when two US soldiers in the international peacekeeping force, LTC Denny Peeples and 1SG Louis Ponticas, donated $6.000 to help women in eastern Bosnia. BILD representatives contacted our associate organization Prijateljice, an umbrella women's organization in Tuzla, to learn how we could best help women in eastern Bosnia. They advised us to invest in baby chicks and chicken food thus the project "Creating Sustainable Income and Empowering Women" commenced.

Sustained through private donations and grants

Given that a baby chick costs about 65 cents and a 10kg bag of chicken food costs about $5.50, this project is excellent for donors who have relatively small amounts to contribute. We once received $9.25 from a proud group of children at the United Methodist Church in Ithaca, NY, thereby inspiring $55 in local investments and $130 in fully grown chickens. All donations are welcome here. 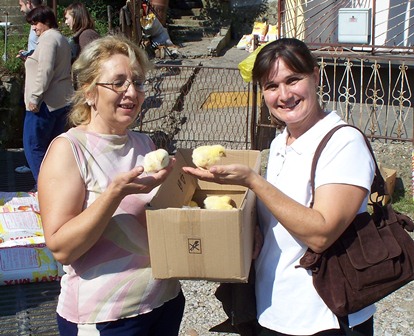 Members of the women's association receiving a delivery of baby chicks 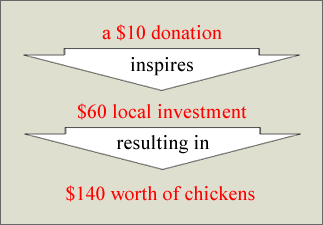 Member of the women's association inspecting delivery of baby chicks 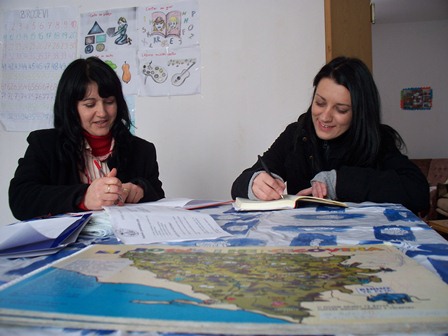 Suada and Dijana planning a delivery of chicks and chicken food